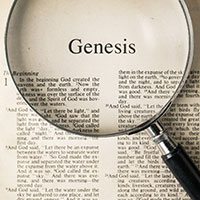 Outlining the text correctly yet missing the point entirely

It is hard to miss the obvious textual outline of Genesis 12-50. I don’t know that I have ever read a commentary that neglected to observe that the structure of this narrative revolves around the four ancient Jewish patriarchs: Abraham/Isaac (12-25), Jacob (26-36), Joseph (37-50). Through the words of my childhood Sunday school teachers and curricula, the stories of these patriarchs fell upon my innocent ears—whether intended or not—as the history of undeniably virtuous God-followers, exemplars of what it means to love and trust God, to live righteously. I now cringe at such an interpretive framework from two perspectives.

First, the central character of Genesis 12-50 is not Abraham, Isaac, Jacob, or Joseph. No, the prime actor is none other than the One who refuses to be thwarted in propelling forward His redemptive project and prospering fulfillment of His redemptive promises. In fact, any interpretive framework that fails to recognize God as the central character and pre-eminent actor in the entire biblical narrative is a huge and tragic distortion, one we should seek to correct for ourselves and others at every turn.

Second, I cringe at the notion that patriarchal history is essentially commendatory. The biblical truth about each of the four patriarchs is as unflattering as it is unvarnished. Abraham’s astonishing faith in obeying God’s directives to migrate to Canaan and later to sacrifice the child of promise is accompanied by a litany of episodes in which he exhibits failures ranging from cowardice, to deceitfulness, to presumption and prejudice. Isaac is portrayed more as a vacillating, gullible, even feckless husband and father than as a deserving heir and role model. Jacob is a study in contrasts. He is a shrewd, unscrupulous schemer yet paradoxically an opportunist who shows flashes of spiritual brilliance such as pledging his allegiance to the God who reveals himself to him, and humbly seeking reconciliation with the brother he defrauded. Profound hardship and injustice reshape Joseph from a brash, coddled, entitled young man to a godly, virtuous, capable and compassionate leader.

The notion that God favors the worthy is impossible to credit in Scripture. The story of redemption is a story of God’s outrageous and indefatigable grace from beginning (the literal meaning of “genesis”) to end. We simply cannot afford to forget that.

How strong can we be together?

Unintended dependency is a tragic and perplexing aspect of our Western missionary legacy. Steve Saint challenges the notion that the appropriate response to “dependency is independency.” He suggests that the biblical antidote is interdependency. And he offers some practical suggestions as to how interdependency can work. Right on, Steve.