In the late nineteenth century, a movement began that has had a profound influence on evangelical Protestantism. Its impact has been felt in every part of the world, producing a large percentage of North American evangelical missionaries and serving as a primary educational enterprise for local church expansion and development. This phenomenon came to be known as the Bible institute movement and, later, the Bible College movement.

From the humble beginnings of the Missionary Training Institute(Nyack College) in New York City in 1882 to the launching of such schools as Moody Bible Institute in 1886 and Toronto Bible School (Tyndale University College & Seminary) in 1894, the Bible college movement has proliferated throughout North America.

More than 130 years after the first Bible schools began, it is estimated there are more than 1000 Bible schools and colleges throughout Canada and the United States. Approximately 200 of these institutions have a relationship with the Association for Biblical Higher Education, either through accreditation or affiliation. In most essential ways, today’s biblical higher education institutions still bear substantial resemblance to their forbears. For example, the current curriculum of undergraduate institutions accredited by ABHE still requires a core of biblical and theological studies, along with a substantial distribution of general or liberal arts studies, and a core of professional studies. Ministry field education and service learning opportunities complement course work. The ethos of today’s biblical higher education institutions can still be described as academically serious, gospel-centered, and discipleship-oriented, fostering spiritual and ministry formation.

A growing percentage of ABHE members have earned accreditation not only with ABHE but also with one of the six U.S. regional accrediting associations or the applicable Canadian provincial government or university recognition system. Many institutions’ professional programs have also sought and received accreditation by the relevant specialized/professional accrediting agency (e.g., NCATE, CACREP, NASM). A growing number have also established seminaries and graduate divisions. Library holdings and learning resources have expanded. Administrators and faculty have earned terminal degrees, engage in research and writing, and participate in professional associations in their designated fields. In short, institutions of biblical higher education have achieved widespread and growing credibility and currency within the larger academic community. Research consistently substantiates the claim that biblical higher education institutions produce educational outcomes comparable or superior to other highereducation peers. 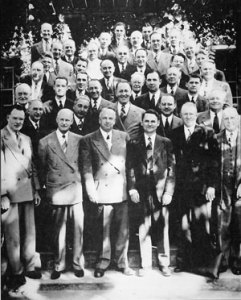