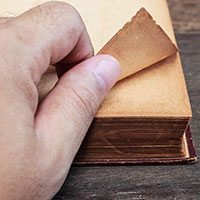 Turning the page without breaking the thought

If you read the Bible one book at a time, it is easy to miss a most intriguing contrast between Genesis 48 and Exodus 1. Providentially planted in Egypt in order to preserve the people of promise, Joseph fathered two bi-racial sons by his marriage to Pharaoh’s daughter Asenath. Having learned that his father, Jacob—who had migrated to Egypt at Pharaoh’s behest—was on his deathbed, Joseph presents his two Egyptian-born sons to his father seeking a patriarchal blessing. Without hesitation, Jacob proceeds to claim these two half-breeds, Ephraim and Manasseh, as full members of his progeny and heirs of the divine promise that would ultimately issue in the Messiah-Redeemer!

Fast forward 400 years. As the narrative of Exodus opens, we are told, Now there arose a new king over Egypt who did not know Joseph (Exodus 1:8). Unlike Jacob, who reflected a spirit of inclusion and embrace, Egypt’s new ruler assumed a posture of prejudice, paranoia, and exclusion. The “we/they” language of the Exodus 1 text rings stark and shameless. Frankly, I hear echoes of Pharaoh’s situational analysis, statements, and actions in a great deal of contemporary political rhetoric and policy concerning immigration. I will refrain from naming names.

Granting the possibility of honest differences relative to modern social and political policy, my point is that the biblical narrative clearly elucidates a stark contrast between Jahweh’s posture of inclusivity and the typical human bias toward exclusivity. The Old Testament demonstrates that Israel got this wrong over and over again. They erred in thinking they were the object of God’s redemptive purposes rather than merely the channel in God’s great plan to reconcile members of all the rebellious and estranged human families to Himself.

A persistent and pernicious delusion

Pharaoh was deluded in thinking that Egypt’s blessing and prosperity came from the projection of its power and cultural superiority. He completely missed the point of Egypt’s role as insulator and incubator of the people group chosen by God by whom to deliver His Deliverer. Similarly, the most religiously upright people of Jesus’ day, the Scribes and Pharisees, heaped scorn and condescension upon the lawless gentiles. Even the Apostles had to be jolted (e.g., Peter concerning Cornelius in Acts 10) into realizing that God’s call to salvation in Messiah Jesus extended to those formerly considered beyond the horizon of His concern.

While in our own time and place we rightly reaffirm our resolute and righteous commitment to biblical fidelity and doctrinal purity, we dare not fall into a posture as mummified and mistaken as Pharaoh’s.

5 Steps to Break a Toxic Workplace

The first responsibility of a leader is to define reality, so says leadership legend Max de Pree. Best Christian Workplaces Institute President Al Lopus writes, It’s not easy for me to tell people they are leading a toxic organization. It really isn’t. I would rather tell them their organization is flourishing. Yet about 25% of the organizations that we survey are … How can I say it any other way? … TOXIC. Do you have the courage to find out whether your workplace is toxic—and how to remedy it?

Writing for Canada’s Christian Week, Brian Zahnd offers a brilliant reminder that the Bible turns the conventional perspective of history upside down. No history from from the pinnacle of power here. To the contrary, the perspective of biblical author’s is that of the oppressed, disempowered, disenfranchised, exiles. When we realize this, we have a new opportunity to appreciate God’s special advocacy of outsiders.