The Gloves Are Off 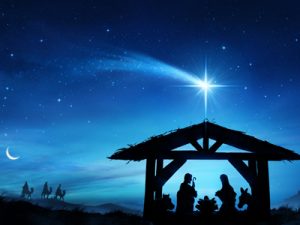 Most of our mental (and commercial, for that matter) Christmas-card-photo images correspond to the description we find in Matthew 2:1-12.

Now after Jesus was born in Bethlehem of Judea in the days of Herod the king, behold, wise men rom the east came to Jerusalem, saying, “Where is he who has been born king of the Jews? For we saw his star when it rose and have come to worship him.” When Herod the king heard this, he was troubled, and all Jerusalem with him; and assembling all the chief priests and scribes of the people, he inquired of them where the Christ was to be born. They told him, “In Bethlehem of Judea, for so it is written by the prophet:

“‘And you, O Bethlehem, in the land of Judah,
are by no means least among the rulers of Judah;
for from you shall come a ruler
who will shepherd my people Israel.’”

Then Herod summoned the wise men secretly and ascertained from them what time the star had appeared. And he sent them to Bethlehem, saying, “Go and search diligently for the child, and when you have found him, bring me word, that I too may come and worship him.” After listening to the king, they went on their way. And behold, the star that they had seen when it rose went before them until it came to rest over the place where the child was. When they saw the star, they rejoiced exceedingly with great joy. And going into the house, they saw the child with Mary his mother, and they fell down and worshiped him. Then, opening their treasures, they offered him gifts, gold and frankincense and myrrh. And being warned in a dream not to return to Herod, they departed to their own country by another way. [ESV]

Appearances can be deceiving

Regal Magi step into a cozy enclave at the culmination of a noble quest. Enraptured by the sight at long last of the young mother and her child of destiny, they fall down to worship, offering lavish gifts befitting a king.

But Matthew’s account makes it clear to us that the incarnation is also an invasion of enemy territory. Herod is merely the most proximate rogue ruler representing all of the entrenched, devil-inspired opposition to God’s Messiah-Redeemer. In his paranoia, Herod unleashes a visceral and sinister slaughter by which to ensure that his would-be rival will be eradicated (Matthew 2:16-18, c.f., Jeremiah 31).

It is wise for us to remember that the coming of Jesus is actually more like Mortal Kombat than Mayberry. The invasion has succeeded, but the defeated enemy exacted a terrible price and is not even yet going quietly into the night. He remains bent on taking prisoners on his way to the abyss.

No matter what the Christmas cards portray.

Joy to a fear-filled world

This essay by the incomparable Philip Yancey reveals the juxtaposition of hope and fear throughout the Bible’s nativity narrative. This is not the sort of irony, Yancey writes, that Kurt Vonnegut imagines but the one John Donne—and the Gospel historian Luke—rightly perceived.