Philip E. Dearborn Elected as Next President of ABHE

We are pleased to announce that Dr. Philip Dearborn has been elected to serve as ABHE President effective July 1, 2020.

Philip Dearborn has served as Provost of Lancaster Bible College | Capital Seminary and Graduate School for the past five years. Over the last 21 years, Philip has served in numerous roles within LBC, starting his higher education career recruiting students in the Admissions Office. He then made the transition to Academic Affairs serving as the Registrar, Associate Vice President of Academic and Affairs, Vice President of Academic Affairs, and now Provost. For those unfamiliar with Philip Dearborn, you can view his profile HERE.

Passing of the Baton 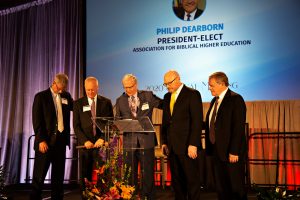